a bug fix release with some small feature additions is available from the usual place:

small feature additions are:
- lots of beanshell wrapper functions to for UI programming and easier access to MeTA Studio APIs
- the windows installer now includes sample scripts and widgets in the respective directories under the installation directory.

Note: To get a desktop shortcut for MeTA Studio under GNOME (under GNU/Linux, shd work for others too) u will need to create a file called meta.desktop in $HOME/Desktop directory and type:


You will need to appropriately modify the Exec entry to suit your installation directory of JRE and metastudio.
Posted by V. Ganesh at 2:32 AM No comments:

Programming in and for Devanagari

Programming for Devenagari has been largely supported by mordern languages like Java.
However, I have never tried before to program in devanagari. Using the Google's Indic transliteration tool (http://www.google.com/transliterate/indic) and a modified BeanShell editor for MeTA Studio I had some fun (http://tovganesh.googlepages.com/ganak.bsh):


now the function can be called as:

which was cool. I tried the same trick in JavaFX Pad with the following code (http://tovganesh.googlepages.com/om.fx):

and WOW it worked :) 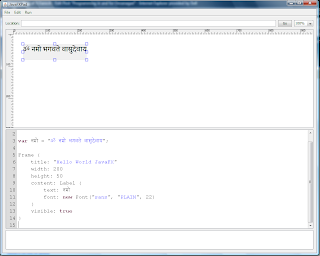 now finally I used a unicode capable editor to key in the following Java snippet:

and compiled and ran it as shown in the screen shot: 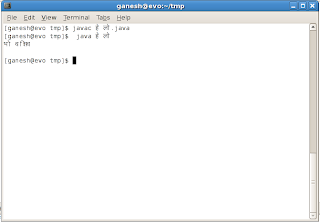 and as u see, this too worked . Only the output is a bit problematic because of some font problem with my Indic font installation on FC6. However, the same is not the case when the code is written in the modified BeanShell editor in MeTA Studio.

In any case I enjoyed this experiment and hope that one day I can write a whole useful software in Sanskrit :)
Posted by V. Ganesh at 8:48 AM No comments:

Email ThisBlogThis!Share to TwitterShare to FacebookShare to Pinterest
Labels: recreational 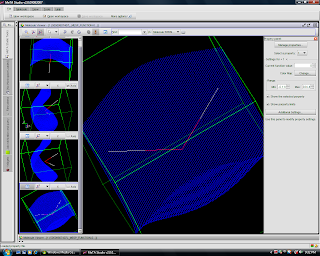 The latest version adds multi-view panel to the in-built viewer of MeTA Studio allowing you to have different views (camera views) of the same scene at the same time. Especially useful when handling large molecules and viewing properties. Other improvements include support for interpolaters (see Interpolation APIs in metastudio help) and a new "interp" keyword in Find dialog that allows you to intepolate currently loaded properties. To use this:

here dx, dy and dz are values with which the current scalar fields grid step size is devided, prop-number is the index of the property (scalar field) you would like to modify. And also includes the usual list of small improvements and bug fixes ;)

Updated packages are available from the usual place: http://code.google.com/p/metastudio/
Posted by V. Ganesh at 7:54 PM No comments: