I never thought that anybody will ever write such a post! And I would have considered myself to be the last person to ever think of making the switch.

But it happened. I have been using Windows Vista Home Basic on my HCL MiLeap-L, which originally came loaded with Ubuntu 7.10 which I had upgraded to Ubuntu 8.04 very recently. The switch was not a single day decision. I was using Ubuntu on my MiLeap of quite a time, in fact ever since I purchased it, thats about six months ago. Over the time I realised that I was spending more and more time configuring and fine tuning the Ubuntu installation than actually getting any real work done. True, I learned (majority of the times re-learned) many a things, but I just felt that all this was a complete waste of time. The Ububtu updates are one of the most horrid experiences; they can come any time (unlike scheduled release of Windows updates) and they are big all the time (10s or 100s or MBs!). Then as I mentioned in this post, that I had to recompile the rt73 drivers for appropriately supporting wi-fi ad-hoc mode... this resulted in another pain, every time there is a kernel version change, I had to recompile these drivers. And after I updated to Ubuntu 8.04 there have been at least a dozen of these updates. All this made me think hard and finally I switched over to Vista.

I have installed a Windows Vista Home Basic edition on MiLeap, as this is the only edition which is fit for the kind of hardware that is there on my laptop. I chose Vista instead of XP because I have been using Vista on primary desktop and my experience with it has been a far better environment than XP.

It took about 2hrs to completely install Vista and get the desktop. The drivers for my Wi-Fi and Sound were missing in the default install. Which were easy to obtain from Windows update ( I connected to the net using the Ethernet port on my laptop). I also quickly updated to SP1. Overall the amount of download was about 300 MB. This was far better than Ubuntu, where I am sure that I have done more than 2GB updates.

So what do I miss from Ubuntu world?

If I forget about the philosophical reason for using Ubuntu, which anyway a user hardly cares (a user psychology is always to get her task done, and very rarely how the task is done)... I only miss one thing: the gcc compiler package. That said, I rarely used it on my laptop, as most of the time I accessed it from either my VirtualBox installation or my old and well configured FC6 linux box. There was obviously no problem in installing Python and Java on my laptop, that I frequently use (need)...Python for trying out s/t quickly and Java ofcourse for MeTA Studio :)

Other things that I generally use on my laptop: OpenOffice, LaTeX, Media player and Browser are there in Vista. OpenOffice and LaTeX of course had to be installed. But the Windows Media player and IE7 are just great. I hardly used Firefox in Ubuntu (when I had it installed), but rather used Opera as it was better and faster. But on Vista I am sticking to IE7 for the time being, for some strange reasons like this and this [links to previous post].

Next, I used to use Gizmo to make voice calls to my GTalk mates... now with GTalk available natively, I am evidently not missing it.

Next, my laptop has a strange screen resolution: 800x480. Ubuntu had always trouble with this, most of the dialogs never fitted properly in the display area, even after I did a lot of tweaking. Vista was not without problems though. The first time I started it, it went to a virtual 1024x768 resolution and gave me a scrollable desktop! But after I changed the resolution appropriately, all most all the dialogs I have encountered are fitted properly in the display area... which is sorta great considering that Vista was never made for such a low powered ULCPCs.

Boot up time of Vista is about same as Ubuntu, provided AVG is not installed. In any case I installed and uninstalled AVG which I found to really slow down my laptop to make it almost unusable. So, for the moment I rely on Vista's "strong" security features and windows defender to protect me against malicious attacks.

Though battery times are almost equal for both Vista and Ubuntu, I find Vista does a better job in handling the "sleep" mode. For me the sleep and the hibernate feature never worked on the Ubuntu setup. But it has worked out-of-box for the Vista installation. And now, I never shutdown my laptop ... I just put it to sleep :-) Putting it in sleep mode has obvious advantage of getting the desktop back in under 20sec (max), as against about 2mins required to boot up the whole stuff. My desktop though boots in less than 20 secs, and wakes up from a sleep in about 5 secs ... owing obviously to quite high end hardware specs.

So whats not well with Vista?

Well the general answer to this Q is, nothing so far ;)

But there are a few things that are not smooth. One of the prime things is the support for Bluetooth dongles. While on Linux I found that most of the dongles work properly without a hassle, this is not true with Vista, forget about earlier versions of Windows. I simply do not understand why this area is so neglected in Windows.

In Ubuntu, when running on battery mode, the GNOME applet always used to display the amount of time the battery will last. But in Vista so far what I get the the % amount of battery remaining, this to me is actually not so helpful. Till now I have not found a way to change this.

And what about Vista ratings?

aka. Windows Experience Index. Here is it:

evidently, the very basic stuff, if you compare it with my dekstop:

PPS: I am in no way advocating the use of Vista. I am just telling my experience. Its for each user to decide what is best for him/her. I am no way related to Microsoft and this post is not endrosed by them either.

I have been using virtualization technologies on my Vista machine, but was surprised to find that there is a purely Java based virtualization tool exists.. and what a fun it runs on my Nokia E51 too, allowing me to boot FreeDOS on my mobile!
Posted by V. Ganesh at 7:22 PM No comments: 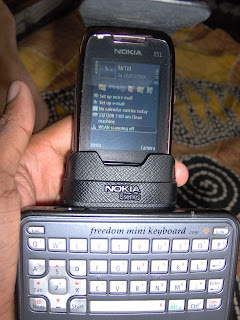 This MeTA Studio update brings in an assortment of changes... especially to the backend graphics pipeline. The graphics pipeline has be rewritten (but all the public APIs preserved) so that external dependencies (like Java3D) are differed till they are acutally requested for. This makes using MeTA.jar to construct applets a simpler task and now only requires this file for all the default graphics applications. For an example take a look at: http://chem.unipune.ernet.in/~tcg/MeTAppletAdapter/MeTAppletAdapter.html
I will further update and release the source of the above link in comming days.

The new binary distro also include two files in scripts directory that give example on using the federation framework for building simple distributed applications: testfedconsumer.bsh and testfedservice.bsh ... more on this soon ;)

In the mean time get the latest from: http://code.google.com/p/metastudio/

... no source updates yet but expect that soon :)

UPDATE:
The applet adapter source is posted at: http://tovganesh.googlepages.com/MeTAppletAdapter.zip
The HTML/Javascript stuff seem to work well in Firefox, however there are some problems with IE. Didn't have time to look into it. Any help in this regard is appreciated!
This new interface is now used in WebProp.
Posted by V. Ganesh at 8:50 AM No comments:

I primarily use my desktop running on Vista UE and my MiLeap running on Ubuntu 8.04 for work and fun. As most of the real work that I do (read programming) is on my Vista machine, I many a times need access to Ubuntu to get some stuff checked in the Linux world for which I find using VirtualBox as the best solution. I had tried Virtual PC before, but I find VirtualBox to be much better product.

When I started using VirtualBox, I had installed Ubuntu 7.04 and later upgraded to 7.10. At the same time my MiLeap came bundled with 7.10 which I quickly upgraded to 8.04 as I badly need a lots of new stuff that was in 8.04 but not in 7.10. Was thinking of doing the same thing with my VirtualBox installation, but then something strange happened. My VirtualBox hardware emulation is actually pretty minimal for Ubuntu installation: 5GB HDD and 256MB RAM. I though for myself, I have the required gcc/g++ (which for my work has not changed much from the 7.10 to 8.04) and the only other thing I occasionally use is Browser aka Firefox. Now the only thing I really care about is a better web experience inside my VirtaulBox Ubuntu installation whenever I need it. I actually do not use any thing else than that: compiler and Firefox. So I merely upgraded to Firefox 3.0 and just forgot about what version of Ubuntu I was using. Later on I started jotting this down in the blog, from Firefox 3.0 on my VirtualBox Ubuntu (which version? what hardware?)

The above was just a description of what I had experienced in the VirtualBox environment. But lets take this further to real (yet mock) usage scenarios. User Joe buys a computer. Joe doesn't care about what kind of processor and stuff like that, the marketing guy on the counter manages to convince him that he has got the best deal. Jeo uses GMail for mail, PicasaWeb for photos, YouTube for videos, Google Docs for docs, spreadsheet and creating presentations and thats it. Jeo needs only these every day. He uses his favorite browser (the one that came with the OS) to access these services (to him they really are applications). Some day he discovers that there are alternative browsers and then installs one of the popular ones. After a few years Ubuntu and Microsoft come up with brand new OSs with tonnes of features and ever increasing hardware requirements. Joe doesn't see why he needs all that, stops buying (or using) new hardware and new OS, and just upgrades himself to the new version of the browser that was just released.

If this is how it works out for majority of users, Ubuntu and Microsoft will have tough time convincing users to try out their next best offering... of course this has a caveat that your favorite browser might stop supporting previous OS releases. As it happened with IE and Firefox 3 (no support for my old Windows 98 machine!).

Leaves me wondering about this cloud computing scenario. It looks to be an interesting perspective. Something that can't exist without the current client OS but soon these will be a thing of past when they will be accessed through low cost devices like ULCPCs... where only a browser upgrade will enhance the user experience. The applications keep improving on the sever side .. no need to purchase/download/install them locally. You only need a fat pipe, and that is becoming cheaper by the day. Sun Microsystem always says "The Network is the Computer"... looks like we are sooner or later headed that way.

On the developer front, this is gonna be another interesting stuff. Google is already providing a lot of APIs to access and build applications for its cloud computing resources. Note that you are here not developing on a isolated machine anymore, you are using a huge computing resource .. and the possibilities are limitless.
Posted by V. Ganesh at 7:43 AM No comments: