A new version of MeTA Studio is now available for download from the usual place at: http://code.google.com/p/metastudio/

This version introduces a number of updates:

a) First and foremost, the binary package downloads are no longer from the UoP chem server, but are from SkyDrive. This is because I am no longer associated with UoP and hence have moved out the binary download site.

b) The source updates are now stripped of the the generated Java docs which allows me to keep the whose source tar ball small and thus make it more frequently available from: http://code.google.com/p/metastudio/downloads/list

c) Starting from the current version (MeTA Studio v2.0.14092008), an online update service is introduced. The updates are kept at: http://tovganesh.googlepages.com/ and are fetched by the updated manager. Note that this is the best and cheapest way to keep MeTA Studio updated from now, of course, once you have installed the complete binary package of the current version. However, note that this service currently doesn't work properly on Windows Vista, if you have used the windows specific installer. One workaround is to start MeTA Studio in administrative mode and then attempt an update.

d) Preferences tab now contains a button to show a simple federation rule editor. This is to allow changing security rules of underlying federation framework without restarting the editor. 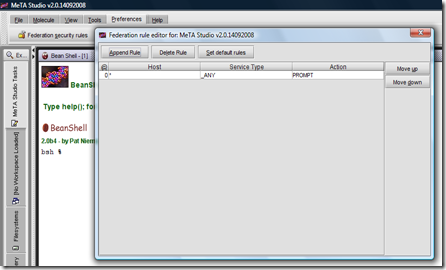 Currently the only supported script is of the type BeanShell. This feature allows you to write scripts that are entirely new applications, but runs inside the MeTA Studio virtual environment :) Boy this should be cool ;)

f) Assortment of bug fixes and routine changes [detecting monomers] ... something you always expect from an update ;)

g) and a number of more scripts in scripts/ folder so that you can write more of what you want to enhance the IDE.

So try out the stuff and give me feedback...