Ever since I have been "mobilized", so to say, I have been using Nokia phone. That was not long ago though. My first phone was Nokia 6600 which I got in 2006. I was quite happy with the phone and Nokia build, until they invoked the then much publicized and now deeply forgotten advisory on their BL-5C class batteries made by a particular manufacturer. After I learned from their website (http://batteryreplacement.nokia.com/batteryreplacement/en/) that my battery also falls in the faulty category I promptly registered it on their site for a replacement to be sent to my home address. The point is, I never ever got this replacement. 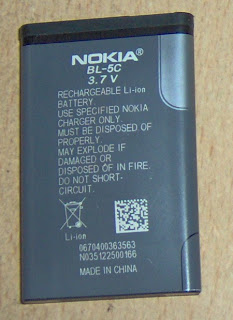 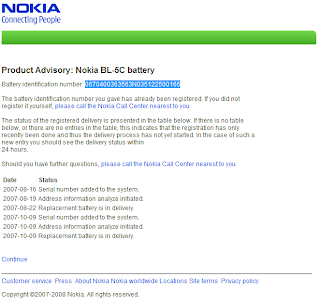 Which obviously is very very false, as I have never received this. I repeatedly called the Nokia care center, India on their provided number but they repeatedly kept dodging me saying that you will soon get the replacement. On the top of all this their number is *not* toll free and I have ended up paying more than 200 INR just to call them, which of-course provided no definite information. In the end one of their executives asked me to go the Nokia Care center in Shivaji Nagar, Pune called "Akshay Telecom". When I reached the place, I was informed that those people have moved to another place: F. C. Road. WoW! The "care-executive", neither their website have made the changes and made me go from one place to another! The lady at the reception (of F. C. Road branch)was simply rude. She simply said we dont provide replacements. Irritated, I again called the Nokia Care center number, again paying through my nose for the call. The "executive" this time took down my "complain", and asked me to again visit "Akshay Telecom" at the Shivaji Nagar address!! I politely told her that I was at the center, and they have moved to a new address! She merely said, that I would get a replacement within a week. That was one month ago. And I have decided not to call those people again. They are simply bad.

Even though I got a new Nokia phone (E51) a few months ago, the next time I am buying a phone, I would think very very hard before going for Nokia. Just making good phones is not good enough, you must have good customer care too. You should know that even one dissatisfied customer can make a lot of difference to you.
Posted by V. Ganesh at 3:34 AM

Email ThisBlogThis!Share to TwitterShare to FacebookShare to Pinterest
Labels: nokia