In an earlier post, I had noted that I have been using Windows Vista on my netbook - HCL's MiLeap. To speed things up I used to use a spare 256 MB card as a ReadyBoost device until recently, when I upgraded MiLeap memory to 1GB from 512MB. Well its been quite some time now since I switched over to Vista from Ubuntu, and as far as my netbook is concerned I don't think that I will ever come back to Ubuntu, even after the release of the most recent 'netbook' friendly version. I find myself more productive than just tweaking things around on my netbook, ever since I had installed Vista. Ok thats for my day-to-day-work.

I had also been posting about the possibility of a ultra cheap netbook especially tailored for the Indian market. Putting Vista or any version of Windows (probably even Windows CE) on such a machine would probably, according to me, be a big mistake. Firstly, it adds up to the extra cost of the product. Secondly, you would be dependent on a company for your software and would limit the ability to squeeze hardware as you want it, if an-off-the shelf OS is chosen. Thirdly, an OS like Vista is not devised for small footprint system (MiLeap is not exactly a small footprint device: 900MHz Celeron-M-ULV, 512MB (now 1GB) RAM and 30GB HDD). Vista won't, for example, even fit on a 2GB pen-drive on which I have been using Puppy Linux for some time now. Windows CE does address the second and third issue to a large extent, but definitely not the first one.

With my 256MB SD-Card lying around I thought of putting it to some good use. MiLeap has a inbuilt card reader and you could make it boot from the SD-Card. Since, I though that carrying my pen-drive around just to boot of Puppy was a bit of a pain, I simply installed it on my SD-Card and made MiLeap dual-boot: Puppy from 256MB SD-Card and Vista from 30GB HDD. You see the contrast? 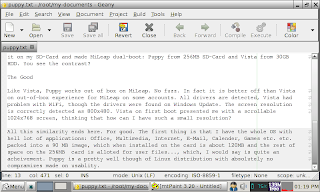 Like Vista, Puppy works out of box on MiLeap. No fuzz. In fact it is better off than Vista on out-of-box experience for MiLeap on some accounts. All drivers are detected (except the touchpad, which is not properly configured, and behaves more like a mouse. UPDATE: this is fixed in the latest version, but have not verified it), Vista had problem with detecting on-bord WiFi, though the drivers were found on Windows Update. The screen resolution is correctly detected as 800x480. Vista on first boot presented me with a scrollable 1024x768 screen, thinking that how can I have such a small resolution?

All this similarity ends here. For good. The first point is that I have the whole OS with hell lot of applications: Office, Multimedia, Internet, E-Mail, Calender, Games etc. etc. packed into a ~90 MB image, which when installed on the card is about 120MB and the rest of space on the 256MB card is allotted for user files..., which, I would say is quite an achievement. Puppy is pretty well thought of Linux distribution with absolutely no compromises made on usability. Its simply wonderful to have a modern OS fitted in my arcane 256MB card, and with ample space to keep my files too.

So is puppy secure? Well it depends on how you see it. If you are looking for multiple user accounts with login screens, it is not, as far as the out of box version is concerned. You can of course tweak it ... but well you know, how many out there would do so? Yes, OEMs may probably try to do it. That is one of the main reasons I suggest using Puppy for a extremely low cost NetBook that is productive. You can essentially remaster the Puppy the way you want in minutes... and then simply make an ISO and use the remastered copy every where. Its such a breeze. I am in the process of trying out this very feature and will post my experiences soon. 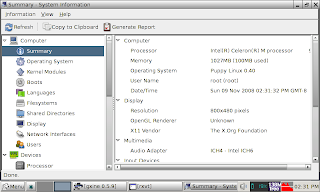 And well it still has one problem that seems to have not been solved in any Linux distribution that I have used so far: Its default WiFi driver can't join my home ad-hoc network if I use WEP/WPA security features... This is really frustrating. But in the wild probably no one uses ad-hoc networks?

But then again the point is, I still love this little Puppy :-) Battery life being one more issue to love it.

Under Vista I generally get average battery life of 3 hr 10 mins. Of course I use quite a lot of applications and do some programming on it (Java, MS Office/OpenOffice, LaTeX, Nokia PC Suit, Firefox, IE8, Chrome and many more). All this leaves about 15GB for user files (of the 30 GB disk)... of which 5GB is already consumed ;-) If Vista installation is cozy, Puppy installation seems to be breath of fresh air :) Puppy too gives similar battery life, though some what better... about 3 hrs 20 - 30 mins. So I guess the power management stuff in Puppy is pretty good. However, I have not found a way to suspend / sleep in Puppy. But then Puppy boots and responds fast enough to probably not have this feature at all!

Another issue to love Puppy is that it plays mp3 files out-of-box, no need to download any codecs. The in-built gxine player is superb, no fuzz, minimalistic multimedia player, which can also handle number of video formats. And, oh well, SeaMonkey browser comes with Adobe Flash Plugin, so YouTube support is out of box.

For whom it is good?

Well if majority of your data is on Internet (read Web 2.0), but you still need a usable OS that does most of things right (word processing, Internet, picture editing, multimedia (mp3, video)) ... then Puppy is your best friend. You can of course, remaster and make a customizable distribution which you can share with others.

Since a NetBook is exactly meant for the above usage scenario, Puppy Linux makes a very strong case for an ultra low cost x86 based NetBook. And I strongly feel that if a ultra-inexpensive NetBook for Indian markets is to be made, Puppy Linux should be the default, supported OS installed on it :-). Well some customizations will definitely be needed, especially pertaining to locale for Indian languages.

And what it is not meant for, in short where to stop expecting more from Puppy?

Well if you are a heavy desktop user and frequently use applications such as the ones I mentioned for my Vista installation on MiLeap... then sorry you must better get pretty heavy hardware and one of those heavy weight OSs: Vista, OS-X or Ubuntu, or wait for Windows 7 ;-)

PS: This post was written using Geany (an IDE!!) on Puppy and then posted by connecting to net using SeaMonkey browser via the ethernet port. The screenshots were taken using mtPaint-screen capture utility in Puppy.
Posted by V. Ganesh at 7:10 PM