The speculation over the Rs 500 laptop

I had a series of posts earlier (available here) largely dreaming about a cheap netbook (or laptop) for India. And now there seems to be a lot of buzz on Rs. 500 (or $10) laptop being introduced by the Indian government for the masses.

What would be the speces of these, would it be highly subsidized, will have to wait till 3 rd Feb to see all that. My only speculation on the Rs 500 laptop is, if this is not something that is substantially subsidized by the government, then this will not have a proper display ( would connect to a TV, or have a cheap LCD monochrome display that could be easily manufactured in India). But well my speculations usually don't go well ;) so its all wait and watch for me. Look back at this space, I will be posting info on this launch as and when I have more idea.

Update: Indian Express has a nice article on other aspects of laptop (and OLPC) especially for education.
Posted by V. Ganesh at 7:51 PM 1 comment:

Email ThisBlogThis!Share to TwitterShare to FacebookShare to Pinterest
Labels: netuter

On 'Republic Day is now just another holiday'...

Yahoo News (via Indian Express) has a very terse article on 'Republic Day is now just another holiday'...And that is when India celebrated its 60th republic day on 26th Jan 2009. For me the first one out side my country.

Though touted as a holiday, it has been never been a holiday for school kids atleast. And to the best of my knowledge a majority of government employees too. Most of whom will flock early in the morning to their respective offices and take pride in saluting and hosting the national flag, with occasional cultural programs. When I was in my school (AFS, Pune), we used to have march-past and some cultural events in the morning with the chief guest mostly being the AOC of pune AF division. It used to be such an enthralling event for me.

As far the concerns of 'new generation', which includes people like me too, being too less concerned about our own country is way too generalised statement. I think there were always self-centred people, and they will always be there. That doesnt mean that every one is like that! What would be more positive from people around is to ensure that their siblings, mates and colleagues develop an esteemed pride towards their nation. Its always easy to criticise, but its what makes people like APJ stand apart, who is true epitome of person who can positively inculcate such a pride towards nation. Its not essential to and is highly undesirable to "follow" APJ or some one, but its more essential to take the message forward and spread it.

:( within hours of release of the latest update of MeTA Studio, I was doing a demonstration of it and found a critical bug with multiple views in the MoleculeViewer (though the demo did go well :)) ...
So this and some more minor bugs get fixed in this online only release....

Important NOTE: U need v 2.0.14012009 installed before you apply this update so as to make sure that everything works OK.

Vista Users: You will have to start MeTA Studio with administrative previlages to complete the update process.
Posted by V. Ganesh at 9:23 PM No comments:

Releasing the full binary and source update for meta studio. Available from usual place at http://code.google.com/p/metastudio/
The latest version string is:
2.0.14012009

This is the first major update this year. Note that this update is not an online update so you will need to install the full binary version ( windows/linux/mac (only the latest intel macs))... Online update will not work for this update!

There are no major changes in the UI, however there are a number of additions in the underlying APIs:

- The integral evaluation (for QM calculation) APIs have been revamped with a completely new structure so that it can be easily extended.
- Map-Reduce as a new means for writing distributed applications over metastudio. This is not yet fully complete, but hope to complete in the next iteration.
- Update to BeanShell interpreter. This was made available in previous updates but now is a part of full binary distribution.

RK helped test the generic binary version on Intel Macs with OSX 10.5 .. and reports that most of the things work except mp3 playing and Java 3D.

Also included are a number of bug fixes reported by users...

WARNING: (again!) The online update will fail, you will have to update with the full binary release for this version.
Posted by V. Ganesh at 2:30 AM No comments:

Mac: not so great for me 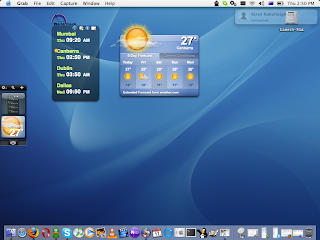 Well thats my experience so far!!
The most sour thing for me was the poor support for Java on Mac... Can't Sun just handle this on their own?!
Posted by V. Ganesh at 3:16 PM No comments: