On loss of Chandrayaan link and reporting by western media

ISRO released a press statement yesterday indicating possible loss of Chandrayaan 1, India's first moon mission. Though they seem to indicate loss of radio contact, it is in all probability that the satellite might have been lost for ever. It is worth noting however that the satellite lived up to almost half is expected age of two years, which as a first ever attempt is quite commendable (http://www.isro.gov.in/pressrelease/scripts/pressreleasein.aspx?Aug29_2009).

What I don't understand though is how reporting on each and every event attached to Chardrayaan been done particularly by the western media. All of these so called reports regarding Chandrayaan typically end like this:

"But the Indian government's space efforts have not been welcomed by all.
Some critics regard the space programme as a waste of resources in a country where millions still lack basic services."


Which I feel is nothing but quite ridiculous and some times even irritating to read (If you are following all the reports of Chandrayaan). Is this reporting or news analysis? Do these reporting guys have a "template" that are simply "applied" without any though? I wonder!

For me, I await Chandrayaan 2 launch :-)

PS: For a more detailed reports on the chain of events related to this link loss see: http://economictimes.indiatimes.com/Features/The-Sunday-ET/Chandrayaan-1-comes-to-end-loses-contact/articleshow/4949845.cms
Posted by V. Ganesh at 9:06 PM No comments:

Back to Linux on MiLeap

(Ha, finally, got some time to quickly jot this down!)

Almost one year ago I had a pressing need for a fully functional software stack for MiLeap in which I could do some real work (and some play), so after evaluating Ubuntu (at that time 7.10 [the good one] and then 8.04 [bad experience]) I shifted MiLeap to Vista (see the post here). For this post I got some pretty immature comments from people who really do not understand what a user needs (you can also read the comments and my reply in the post).

In the mean time I tried other distribution (Puppy Linux was the one that worked best). But I wanted to try a more main stream distribution. I tried Ubuntu netbook remix in the mean time but was not satisfied. Also I do not have any plans of upgrading the Vista HB on this machine to Win 7 as it doesn't meet the minimum advertised system requirements of 1GHz processor (MiLeap has 900 MHz Celeron ULV processor).

As I got a new machine for my work purposes (Dell Studio XPS), I decided to do a fresh clean install of Ubuntu netbook remix on MiLeap. But I must say that this was a complete disaster. One of the primary requirements for me to use a distribution is Skype should work without any glitch. UNR failed miserably with it, and in the attempt to configure the sound settings I manged to crash the UNR desktop and I had no time what-so-ever to spend in fixing it. Later on I figured out that UNR's system requirement is an Intel Atom processor (minimum) [http://www.canonical.com/projects/ubuntu/unr], so no point fiddling with it either.

Next up tried Xbuntu, everything worked great. Except that the UI looked pretty sluggish and arcane. I needed a modern desktop environment and which is quite responsive. So after perusal from one of my friends (who actually wants me to try OpenSuse instead), I went ahead and installed KDE 4.3 from the Kubuntu development repository. And I am amazed, but this is exactly what I needed. Though there still are a few bug in KDE, and some plasmoids crash suddenly, this is a fairly stable system. Well needless to say, my primary requirement, Skype, works like a charm. 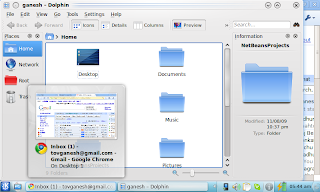 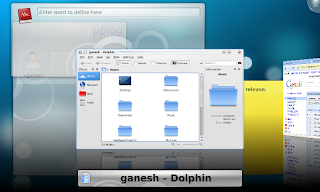 I am still wondering ... I seem to have missed the wonderful KDE for quite some time (6 years since I have been using GNOME as the only DE!)...


Note: My current MiLeap configuration is a bit different from one what I originally purchased. The original one has 512 MB RAM, while my current one has 2GB of RAM. So I have no idea how KDE4.3 will behave on the original MiLeap configuration. In the mean time I would be trying OpenSuse on my Mac with KDE 4.3 ... more on this when I get some more spare time now!

PS: This was written using Chrome 3.0 (in-progress version) for Linux running in KDE. I am not sure why, but Firefox is too sluggish on MiLeap (windows or linux), mostly because of a slow disk.

Update: Downgraded MiLeap L to 1GB RAM and it still works well. I think upgrading the RAM to 2GB on MiLeap is not really beneficial unless you intend to run Vista or do some serious programming, both of these are ruled out for me. Hibernation also works without any problems, though it seems to take longer time to wake up from hibernation than clean boot. In any case, I am beginning to like KDE, its just a fresh breath of air :)
Posted by V. Ganesh at 4:24 PM No comments:

Generally I do not like heavy laptops. But since I have a heavy workload, and I do not have my desktop as back at home, I had to “reward myself” with a Dell XPS 13 (well ….). Dell XPS for all the features it offers, at around 2.2 kgs is a terrific machine, with desktop kind performance. So far I like this machine. Contrary to many reports around the internet about overheating, I can safely say that it gets heated as much as my HCL MiLeap, which is fairly OK… though should test how it behaves in summer. Only drawback I see currently is the Nvidia drivers that come with XPS are a bit old, and CUDA support is not great. Essentially you have to wait for Dell to upgrade their drivers as they are not available from Nvidia site. Currently though I have shifted all my primary work from MiLeap to this machine (which means I will now experiment with OS that best suites MiLeap … read “remove vista” ;-))

Currently, I have Vista dual booted with Ubuntu 9.04 on this Dell machine, though I will be upgrading this machine too to Windows 7 (along with my home desktop). So I will put in a more detailed review when I do so.

In the mean time I am deeply engrossed in writing other things up ;-) Also you could expect a new release of MeTA Studio with some interesting features in coming weeks.

(Update: As of today, 25 Sep 2009, Dell released an updated BIOS for my XPS, after this I am able to install CUDA enabled drivers directly from NVIDIA. Which is quite great :) Now I should have some fun experimenting with CUDA :D)
Posted by V. Ganesh at 4:54 AM No comments: