An aspect of finding water on Moon

The press in India is all gaga over the recently published finding by a joint team of NASA and ISRO about confirmed presence of OH and H2O molecules on moon surface. This is stark contrast to all the negative press that ISRO got after it declared that it has lost contact with Chandrayaan. It is press after all, when are they going to do some mature reporting?

Cutting sort, see (http://m3.jpl.nasa.gov/NEWS/ and http://www.sciencemag.org/cgi/content/abstract/1178658) for more technical information on this findings.

Apart from the scientific (and possibly in longer terms practical) significance of this finding, the Chandrayaan-I mission has opened up a whole new shift in space explorations: of global collaboration. Yes, Chandrayaan-I has some amount of “pride” attached to it, but it was essentially a first space exploration program that involved as many as 20 countries. For this very reason it was chosen for AIAA Space 2009 award (http://en.wikipedia.org/wiki/Chandrayaan-1#Award_for_Chandrayaan-1).

One needs to note that, space exploration in future should not be a just done for “pride” or for a mere “me too”. Space explorations are going to be expensive, of what benefits it brings to the human kind should be the prime objective of each mission. For me, Chandrayaan-I has given a glimpse of what can be achieved by collaboration and not merely showing off some false pride.

I wonder to what extent such collaborations can bring in more knowledge to the human kind. All of us just need to loose a little bit of pride. How much are we ready for this?

Windows 7 is going to be released on:

Was that a coincedence or they planned it ahead? Has any one observed this before?

Interesting to observe this though :-)

Email ThisBlogThis!Share to TwitterShare to FacebookShare to Pinterest
Labels: windows 7

MeTA Studio update: GTalk, other improvements and some experimental ideas…

A new full binary version of MeTA Studio (2.0.05092009) is available for download from the usual place: http://code.google.com/p/metastudio/

New features in this release:

- GTalk/ Jabber integration with the talk and collaborative framework in MeTA Studio, allowing one to have more means of communication than just direct LAN based talk. Note that both the parties need to be using MeTA Studio to take full advantage of this feature. To access this feature use Tools –> Down-arrow –> GTalk –> Sign in

Note that if you have a proxy you will need to make those settings first before trying to log into GTalk / Jabber. All features of MeTA Studio talk except voice talk is supported via GTalk. With this the issue reported here http://code.google.com/p/metastudio/issues/detail?id=11&can=1 is addressed. The original issue did mention yahoo and irc, but there are no plans to support these. GTalk and Jabber protocols are fairly open and are well supported by Smack APIs which are inturn used with in MeTA Studio.

- Staggered reading and connectivity formation for large molecules. With earlier version of MeTA Studio, large molecules (> 1000) atoms took long time to load, as there is huge amount of pre-pressing done to identify and classify bonds, rings and other structures in the molecule. Starting from 2.0.05092009, staggered reader and molecule builder APIs are introduced which allow for faster loading of molecules and at a later stage selectively obtaining the required details.

You might experience some problems using this feature, if you find problems, report them at: http://code.google.com/p/metastudio/issues/list

- “Share this!” feature in MoleculeViewer, allows one to instantly share a molecule object to peer MeTA Studio users on LAN or on GTalk/ Jabber network.

- Support for Apache Derby embedded database has been added to MeTA Studio. Expect some interesting features based on this in near future.

au(): Convert to a.u. (overloaded for value, Point3D and Atom)

angstrom(): Convert to angstrroms (overloaded for value, Point3D and Atom)

- Under the hood graphics and other API changes. And as usual there are assortment for other bug fixes and improvements. For a complete list of changes browse through http://code.google.com/p/metastudio/source/list

Experimental features with this release:

- I will be experimenting with symbolic language interface for MeTA Studio in coming weeks. A simple demo interface has been added for this purpose and is called a Workbook (accessible from Workbook –> New workbook). The only symbol currently interpreted is: Molecule[H2] 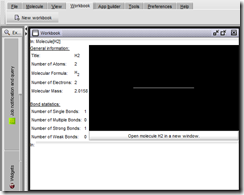 - An App Builder tool to simplify making completely new applications based on MeTA Studio runtime (accessible from App builder –> New app builder workspace). This is currently not functional, and is only a design spec.

MeTA Studio is also now hosted on Ohloh.net: https://www.ohloh.net/p/metastudio/, which currently is providing a means of on-line update. This also serves as a way of showing off the way for displaying users and developers of MeTA Studio. So if you use or develop for MeTA Studio, help spread the word, click on “I use it” Ohloh.net button at the bottom of MeTA Studio home page at: http://code.google.com/p/metastudio/

Have fun! And check out for some new updates with MeTA Studio in coming weeks.

--
Update: Just realized that this is not the case. Once a file is uploaded on Ohloh.net, it is immutable. So this issue is not fixed yet. Any suggestions on online update server place are still welcome.
Posted by V. Ganesh at 4:48 PM No comments: