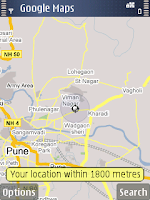 directly from my e51 browser. Which seems to work fine. And works via opera mini beta 5 too except image upload seem not supported. With this i really will not miss my small laptop ;-)
Posted by V. Ganesh at 8:07 PM No comments:

Email ThisBlogThis!Share to TwitterShare to FacebookShare to Pinterest
Labels: e51 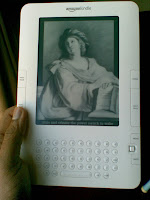 I actually never planned this, but I always liked the idea of Amazon kindle. So when Amazon said they were releasing kindle to the rest of (US), I simply went ahead and ordered one for me.
And then it landed in my office yesterday, since then, have been lugging around with it ;-) So far liking it, quite a lot.
The reading experience is fantastic, the connectivity (well have been to a lot of places around ACT since I got it) is quite good, if not fast. I can access Wikipedia for free (with images), which is fantastic. Listen to MP3 while reading a book (wow, is a bliss). I can easily convert my PDFs to Kindle format, but only text and pictures convert correctly, not (vector) diagrams. I have not used the Amazon stores yet, but will be checking this out for some good books. I am not sure of how much I do have to pay for it though vs. buying a paper back.
And finally, that 20$ rebate was quite a surprise (but well should thank those Nook guys ;-)).
Next, I am waiting for Windows 7 (well for my copy to come), and hopefully some one releases a good (read with a real GPU), lightweight convertible tablet with multitouch :-)
Posted by V. Ganesh at 2:29 PM No comments:

Well, what ever that means. I presume, they were wanting to say 1 Mbps broadband connection is a legal right, no idea who pays for it though.

But this reminded me of Dewang Mehta (wiki: http://en.wikipedia.org/wiki/Dewang_Mehta) who was closely associated with NASCOMM India, and was instrumental in the growth of IT industry back home, used to always say:

We need visionaries like these to be always around ...
Posted by V. Ganesh at 8:40 PM No comments:

A few months ago some one filed a case in Mumbai High Court with a recommendation to ban Google Earth saying that the terrorists used this tool to plan the Mumbai attack that took place a year ago. I am unaware of the current status of this case, but I had a very straight opinion (http://tovganesh.blogspot.com/2008/12/on-google-earth-mumbai-and-pil.html): you can not and should not ban a technology. If do some one will eventually develop a workaround. BANning something is NOT the solution.

And now to top all this, IB, supposedly the organization that is entrusted to provide top intelligence in India goes the same way: BAN the VoIP services as they can't track it! I am quite surprised, if this is how capable our premier intelligence is?! To suggest a naive and laughable solution like this to the GOI.

I heavily depend on skype (with video) to be in touch with my parents back home. And this is the only possible and viable solution for me at present to be able to work far away from home and be still close to them. And I am sure there are plenty of them like me. If the GOI is silly enough to follow the recomendations of incapable IB, I would eventually look for other solutions. Either I go back home, or better still develop my own VoIP with no hopes of any one blocking it.

The excuses that IB gives to GOI of inability to track calls is the encryption done by services like Skype. And the IB claims that Skype shares them with other countries like US and China. Is IB incapable of collaborating with intelligence agencies of some of these "friendly" countries. Does GOI not have enough power to do some thing positive other than merely following short cut solutions like banning?

If IB is incapable of breaking encryption (I admit that is hard, pressuming Skype uses 256-bit encryption, see http://blogs.zdnet.com/ip-telephony/index.php?p=919), the GOI should seriously consider of making quick and urgent upgrading of capabilities of IB.

For me, now is the time to seriously consider other VoIP (with video) alternatives, or write up my own. But, I feel mentioning the "dehya wakyam" of the wonderful, though under staffed, Maharashtra police (http://mahapolice.gov.in/):

सढरक्षणाय खलनिगॄहणाय
which translates to "Protecting the righteous and controlling and annihilating the evil". Guess that sums up every thing, of what I always believe in.
Posted by V. Ganesh at 1:55 AM No comments: