Why Windows 7 is still not "that" touch friendly?

#1 lesson about UIs I learned today ;-) : Without using the stuff, you don't really know how good or bad a piece of user interface it.
I have used iPod touch quite frequently (I don't own one, this one is used by my friend) and have been using Windows 7 on my T91MT for a few days now.
After using both these interface for "reasonable" amount of time, I do really feel that Windows 7 UI is not exactly optimized for touch screens; at least if they are the size of T91MT (8.9" screen). On a larger screen (like the all-in-ones), the story might be different.
What is good?
#1 What ever the MS marketing has advertised ;-)
#2 The super bar, the desktop and explorer arrangements are well done
#3 IE8 is quite well touch friendly
#4 The handwriting recognition and the math input panel are simply fantastic and work very well
And whats not so good?
#1: In the tablet mode on T91MT, there is no replacement for Alt-Tab or Win-Tab. I think this is a way big omission. Given a multitasking OS, I did expect to flick through open applications (only the super bar, and the live preview is *not* the solution, there ought to be something better).
#2: Any dialog with options in it to select, is simply not usable by finger, you end up using the stylus to operate it.
#3: Third party applications are not touch optimized. To me, most notably, Google Chrome.
#4: Interface elements need to scale appropriately for smaller screens with finger touch enabled.
Posted by V. Ganesh at 11:52 PM No comments:


Ok, I was going to type the title of this post as “Experiences: My first tablet”. But then realized that, I in-fact have a tablet: Mobilis, even before I got myself a Netbook (MiLeap). That is partly because I don't like laptops: primarily because of their form factors and secondarily because of the price factor (they were too expensive back then, well still are!).

This made me first buy the Mobilis. However that experience was not exactly pleasing. I am still trying to figure out how best to use this device!

Then I got HCL-MiLeap-L. Which was a terrific machine. But when Windows 7 was released, I really missed the touch feature. So I installed Ubuntu 9.10 on this kid and gave it to my parents as a backup machine for Skype call in event of power failure (the primary desktop running Windows 7).

In the mean time I got an office laptop (Dell XPS). Though pretty good performance (well good for doing some serious work!), it has two major problems: Weight and Heat. Either of these makes the device not so mobile. Also even if Windows 7 is there on this machine, there is no touch screen. To be fair, I was looking for a very portable, light weights, not to expensive machine that I owned ;)

I have been searching for this kind of a device for couple of months, and finally zeroed in onto Asus T91mt (or its successor T101mt). But eventually decided not to wait for the successor and ordered one from techbuy.com.au (who, I guess is fairly good online retailers/ re-seller, that is my experience). Prime reason for that being that there is no public set release date for T101mt, and there is no concrete info on if this will sport an SSD or an HDD. I really did not want to get an HDD based device. For MiLeap too I wanted an SSD based model, but they were simply out of stock when I ordered one. 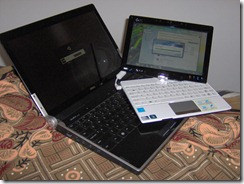 I don’t intend to write a technical review of this product here, but just my experience of using this, in short it has been fantastic as of now.

So what do I use this device for: every thing except for serious programming. My “every thing” doesn’t include playing games or watching high-definition videos. 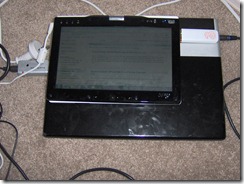 The best way I like to use this device is in tablet mode specifically to read news and stuff. Touch typing is accurate and handwriting recognition is terrific (of Windows 7), it also correct spelling mistakes on the fly ;) Multi-touch (two point) is also pretty accurate and works flawlessly for me.

The keyboard design is pretty good (if I compare this to MiLeap, which was quite cramped).

Heat generation is “very low”. I have a feeling that it is better than my Mobilis, which at some point got so hot that I could not hold it.

There are no fans! So it is very quite, and I am quite happy about this.

As far as the windows experience index goes it is 1.9, the lowest one going to the processor. (Note: I upgraded the memory to 2GB, though the default 1GB is usable, I simply always have too many apps open when it comes to a desktop operating system ;)…).

Finally, this need not be mentioned, but MeTA Studio works pretty well on this device. And drawing molecules with fingers is pretty intuitive (but buggy, so expect a fix, now since I know what happens!) ;) In any case, MeTA Studio is not multi-touch capable (yet).

Update: After constantly using it for few days I have made the following changes-

- And installed them again! after realizing that merely changing power settings to 'high power' makes it faster.

- Removed the super hybrid engine too and put the power options to High performance. With this T91 performs way much smoother even in the tablet mode. The heat is not much of an issue still. Though battery life could be, have to see how it goes.

- Installed Google chrome. But it does not support some cool finger gestures like kinetic or hold and scroll. IE is still integrated well with the touch gestures. (moved to firefox, much better integration with windows 7)

- With this (expensive ?) purchase, I plan to buy no further gadgets for next 2 years, at least ;)

Update3
I have been using One Note (2007) on my T91MT for quite a while now, specifically to quickly write design documents and record memos. And I find it to be quite usable and very productive.
Posted by V. Ganesh at 3:44 PM 10 comments: