‘Nameless’ people, who amused me

I keep meeting strangers, some of who amuse me quite a bit. I have met some ‘well known’ strangers: Chandra Babu Naidu, Arun Shouri and Anna Hazare are some I vividly remember. Of these I have quite a respect for Anna Hazare for the social work he has done in past and continues to do. I have been fortunate enough to have travelled with him as a co-passenger on train (from Hyderabad to Pune) quite some time ago. Had a long chat with him and he was actually fine with giving his autograph to me :)

But I have also met many ‘nameless’ people who amused me, like the once I described here. ‘Nameless’ because, I met them only once, and may probably never meet them.

In Oz too, I met some of these interesting people (affectionately, Aussies :)). Both seemed to have immense interest in Science, even though their current jobs had no direct connection with Science: one guy was a cleaner and another had come to do window frosting in the building I work in.

Both of these guys seem to be well read, and keeping up-to-date with latest Science news and happenings. And I must admit that I was totally impressed with their breadth of reading and knowledge.  The window frosting guy, was quoting from Richard Dawkins, ‘The Selfish Gene’. A book that I read quite some time back, but definitely cannot remember so much that I can quote from it!!

One of the guys (the window frosting guy), was a member of Creation Ministries (http://creation.com/), which seem to promote Science education. But am not totally sure about it, because it seems to have some church connection. Even so, talking to these guys made me feel and wish that people were like this in India :-)

Well, for some reason, I cherish memories of meeting these totally strangers … probably it makes living life fun; and I hope to keep meeting more :)

For Google and Chrome aficionados ;-) 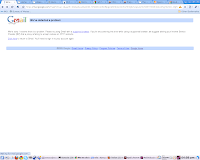 ... they do not seem to recognize each other as compatible ;-)
Or well there is some problem, but thought it was fun reading the error message.
Posted by V. Ganesh at 12:01 AM No comments:

iPad craze, and my Asus T91MT

Well the media is all praises over how "revolutionary" the iPad is. But for me it is a no sell, primarily because it is a consumer device: a device for consuming content and less of creating content. By content I mean write applications, not just make documents. There are other things that no one has bothered to check:
- For a tablet of this size, don't you expect to have handwriting recognition? Hey but iPad has a capacitive touch screen so that probably will not work.
- Does it have palm rejection? No one seems to say anything about this.
- Then there are a whole lot of other things: no multi-task, no web cam etc. etc. that many others have pointed out as obvious omission.
For me the Asus T91MT, that I have been using has all of this. Though it is not all good with palm rejection; it only works well with Microsoft Journal. I heavily depend on the Windows 7 handwriting recognition and has become my primary means of entering notes or writing lots of text; it just works for me. And it has a inbuilt physical keypad, in case you need one (write code?!). I have not yet tried programming on T91MT, but would do so soon ;-)
In any case it depends what you are looking for: if you want a fine balance between productivity and entertainment go for a tablet like Asus T91MT which has an integrated physical keypad. If you are looking for mostly an entertainment centric and content consumption device with which you would also like to get some productivity you might think of getting an iPad. Both of these, I guess, cost almost the same.
Posted by V. Ganesh at 2:17 PM No comments: