Lately have been using my Asus T91 MT a bit too frequently, primary to write documents and occasionally to browse the web. Though I  constantly use the tablet, I hardly thought of two things: faster way to login my machine and better touch friendly window title bar and scroll bars. The rest of the elements in Windows 7 appear to be quite touch friendly to me, but not the above mentioned ones.

During the previous iteration of Windows, Microsoft had released a set of tools called Origami. These tools were specifically meant for touch based UMPC tablet PCs. Two of the tools offered by Microsoft Origami: picture password and touch settings have made a pleasant difference to how I use my tablet PC. You can download Microsoft Origami from here. But note that you may not be able to use other Origami tools on Windows 7 except the ones that I have mentioned. With Asus releasing the "most powerful TabletPC on earth" , probably its time to revive origami for Windows7.

Its been long time since there was a public update for MeTA Studio, partly because there is been lot of behind the scene re-architecting going on. And partly because I have been caught up with other stuff.

Even as a number of features were added for MeTA Studio, its icon had never clanged to reflect the new changes. The current icon is a simple rendering of a macro molecule, with the original intent of MeTA Studio being ease of handling large molecules:

Starting with today, the SVN has a new icon originally designed by APR.

The main site also hosts a logo as shown above. The above icon is basically designed with the four core foundations of MeTA Studio in mind: Organize (molecules) , Visualize, Code and Collaborate. 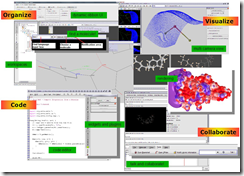 Look back at this space as we prepare to release updates to MeTA Studio in coming weeks.

In a recent post, I had argued for a super phone Software interface that:
"Ideally I would like my smartphone OS to automatically scale its user interface form small portable screen to a large desktop scale screen, handle touch, pen and pointing as well as keyboard, seamlessly. That will make computing on the go painless and computing on desk seamless. You will always need only one device: your personal super phone."

With the release of Atrix, Motorola seems to be heading in exactly this direction. Probably a way to acheive this on a phone is via virtualization. That, I guess is how   Motorola is implementing it. With the ever improving ARM SoC capabilities and recent announcement of Windows for ARM, we are soon approaching:

"Three screens, One brain and the Cloud"

mantra. One who gets this right will define the next revolution in computing technologies.
Posted by V. Ganesh at 10:31 PM No comments:

Almost an year ago I started following Notion Ink (http://tovganesh.blogspot.com/2010/01/notion-ink-another-attempt-at-making.html). One thing I was pretty critical about the device then was the software stack, just what sets them apart from other android tablet efforts?

Now with pretty positive reviews from Engadget (Joanna Stern), Liliputing (Brad Linder) at CES'11, I must say that Rohan Shravan and team have pulled up quite well. Good beginnings Rohan et al., though there is still lots to be done ;)
Posted by V. Ganesh at 10:29 PM No comments: 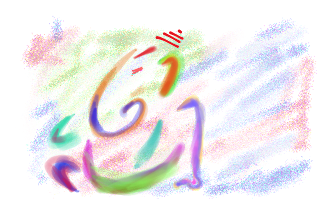 For some time now I have been searching for a good, responsive, free and professional digital painting tool for my Asus T91 and the bamboo tablet (pc). Today I discovered Mypaint (http://mypaint.intilinux.com/) which is an excellent tool for professional digital painting. Best of all it is open source and simply works. The program can also be configured for pressure sensitivity (provided the hardware supports this) and thus provides most natural painting experience. Highly recommended even if painting is just a hobby for you (like me ;-))
Posted by V. Ganesh at 7:31 AM No comments: