An old Netbook and living in a browser

My old netbook (Asus T91 MT) is getting old. Though I installed Windows 8 (upgraded from Windows 7), the experience on it far from stellar. My 2007 desktop (which is also upgraded to Windows 8), handles things much better. The Windows 8 experience on this desktop machine is really pleasing. And now with the new Twitter app, I am more often in the new Windows 8 mode than the desktop mode. It is just so better for twitter and internet browsing (with IE10). I occasionally use Firefox for browsing, but dislike Chrome, because of earlier experiences. When I need to do some real work (outside the browser), there is no other option but to go to desktop (which I frequently need when using Word / Excel or programming or connecting to my remote terminal using Putty).

My netbook has pretty low configuration in comparison to my desktop. But the worse part being that due to low screen resolution, the new Windows 8 apps are not supported. Which is not essentially a problem, as the only reason I used my netbook was as a secondary device for Internet (although these days I prefer using my Lumia). But being not able to use the wonderful "metro mode IE10" is a dampener.

So, this weekend I decided to do some experiments: Turn my netbook into doing only one thing, i.e. Web browsing. The first option was to remove all the Windows 8 apps, including uninstalling IE. Well, but before uninstalling IE I downloaded Chrome, and began the experiment with "chromebook" on an old hardware using a Windows kernel (not the default Linux kernel). 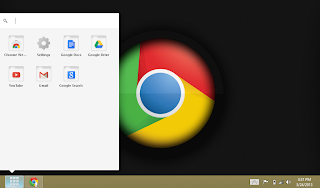 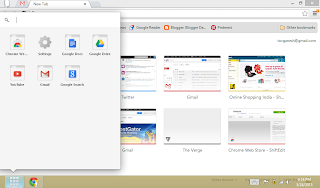 The Chrome looks great and integrated finely with the Windows shell, but the hardware tweaks make it unusable on old hardware.

As soon as started using Chrome, I had multiple issues: gtalk didn't work, youtube didn't work. Now I was quite disappointed to see that Google's own product didn't work with its own browser. After searching and tweaking a bit in the advanced settings, I got gtalk working. But youtube had simply too many issues. Then the next issue was basic browsing had a problem: may a times the webpages simply didn't load. I disabled all gpu related acceleration, thinking this would solve things a bit, it did, but still the experiences was far from what I would expect from a great browser (albeit on a dated hardware).

My next experiment was to try the next opensource browser: Firefox. So essentially I made a "Firefox book". Most of the things went of smoothly, until I started writing this post. For some reason the typing speed in Firefox turns out to be pretty bad for my reasonably powered netbook. 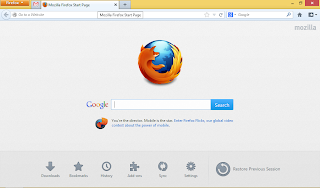 Firefox on my Netbook is an 'OK' experience. There are problems: touch events don't work, typing is painfully slow.

Another not so good thing about Firefox is its poor integration with touch events, make it unusable in tablet mode.

So finally I switched back to IE10. And IE10 is simply the best Windows browser on any hardware. It simply works. I don't have to worry about any incompatibility (such as touch events not working) or slow speed, even on my pretty old hardware. 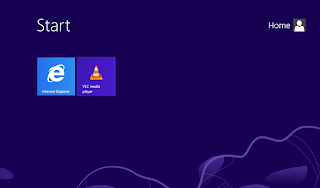 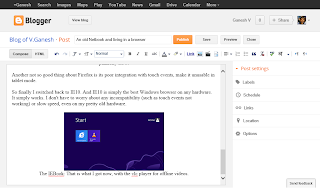 The IEBook: That is what I have got now, with the vlc player for offline videos.

So at the end of this experiment, I have a new product: the IEBook, on a pretty low cost dated hardware, something that I would instead have expected from opensource browser and Linux. Ironical, but I guess the proprietary GMA 500 gpu is the reason for this role reversal. May be someone can try similar experiments on their old 'netbooks', and let me know in the comments section of your experiences. There is one drawback to IEBook though: it doesn't provide as seamless experience with Google services as a Chromebook would.
﻿
﻿
Posted by V. Ganesh at 9:39 PM No comments:

Small (and big) inconsistencies with Windows 8 and Windows Phone

I have been using Windows 8 (on my desktop and netbook) and Windows Phone on daily basis as my primary devices for quite some time now. This post is a list of inconsistencies I find with using these interfaces that are supposed to integrate the experience across the screens:

3) Where is the Bing lock screen image option in Windows 8? It is simply the best feature in Windows Phone.

4) Where is the 'Me tile' in Windows 8? Or other way round: Why is the People tile and the Me tile in Windows Phone not integrated (as in Windows 8)?

5) As with Windows 8, why there is no option to switch off live tile in Windows Phone? No, for end user this is not the same as going to settings and switching off the background services.

6) Why can't I set sound profiles on per application basis for Windows Phone as I do with Windows 8?

7) The desktop notifications and the new Windows store application notifications are all messed up and confusing at best. There is a need for unified notification center, which should be also available with Windows Phone.

8) IE10 UI on Windows 8 (new metro version) is much better, especially the way tabs are handled. Why is this not adapted for Windows Phone is quite a mystery.

These are the major concerns that I have on day-to-day basis. There are others (like why can't I create a new Powerpoint using Windows Phone?). But I guess, these are more niche problems. Until Microsoft fixes these issues, probably Ubuntu stands a better chance of bringing the 'one OS multiple screens' strategy to masses.
Posted by V. Ganesh at 7:46 AM No comments: