About an year ago I had purchased a set of attachment lenses for my Canon 1000D from EBay. These were kind of very cheap replacement for doing some extreme macro shots, as the actual macro lenses from Canon were way too expensive and I simply could not afford to buy them. The cheap replacements turned out to be ok (see one such shot of pollens here http://www.flickr.com/photos/tovganesh/sets/72157628049776643/). But over time I realized that the color reproduction was poor in low light, more over the field of view was extremely narrow. Further, it was quite a task to screw these attachments to the lens only to discover that the subjects have moved away.
So when couple of snails visited to my backyard today, I decided to experiment a bit. And today being a bit sunny day helped. Here are some of the shots taken on my Canon 1000D. 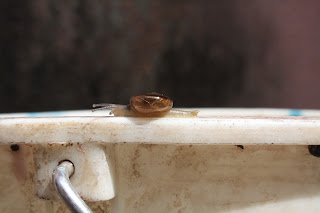 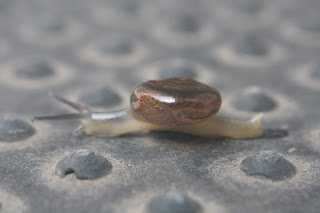 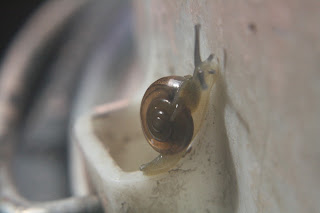 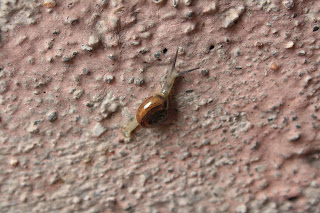 'mother' snail, shot using normal lens of Canon 1000D.
Now snails are very interesting creatures to watch when the crawl by, and my dad wanted me to record a video. My Canon 1000D, though pretty good at photography, doesn't have video recording. This is where my Lumia 800 chips in, which can take pretty good 720p videos. Initial shot was pretty ok. But then it clicked: how about just placing the SLR attachment lenses on top of the Lumia, hold it by hand and shoot?

Simple placement of SLR attachment lenses on Lumia 800, and just hold the lens while shooting.
Surprisingly, it worked out pretty nice. See the video below to get an idea of the additional zoom offered.
So it turned out to be my "jugaad ﻿zoom" for my Lumia 800 ;) I will experiment more with "jugaad zoom" till I can get hold of Lumia 1020 or a higher version of that :P
In any case, now I will more often than not be using these lens attachments.
Posted by V. Ganesh at 12:33 AM No comments:

Linux on my Netbook

Back to Linux and the GMA 500 driver problem
When Windows 8 came out, I was happy to test out and upgrade the Windows 7 installation on my Asus T91MT. It was OK in the beginning, but the GMA 500 drivers were unsupported on Windows 8. This showed up in day-to-day use. IE used to frequently crash, and the display went black for umpteen number of times when I was doing something important. This was fine in the beginning, but even after many updates to Windows 8 this problem never got resolved. Finally, I discovered that Intel has stopped further development of GMA 500 drivers, and the Windows 7 drivers would be the last one out.
With that, I though that it is good time to revisit Linux. This was not the first time I tried Linux on T91. I had done this before, but the state of GMA 500 drivers on Linux has been ever worse. There has not been a supported opensource driver for this quite powerful GPU, because of the "closed" nature of the hardware chipset itself. Ubuntu 13.04 (and its other lighter derivatives: Xubuntu and Mint Linux) with the updated Kernel (3.3.x or higher) has drivers written by Alan Cox that give out-of-box descent graphics support for the GPU. Still, the support is far from optimal, and there is no indication that the situation is going to get better. In any case, I decided to install Xubuntu (and then Mint Linux) on T91 about a month ago. This weblog enlists my experience in using Linux on my T91.
(For the aficionados: I refer to Linux and the Linux distributions - Xubuntu or Mint Linux - interchangeably in this post.)

Why did I actually switch to Xubuntu from Windows 8?
Simple: I am going to buy a new Windows 8 tablet, with newer hardware (read better touch screen, better processor). Not so soon, but eventually will ;)
The basics: Netbook, can I browse the net?
When the Netbooks came out, one of the basic functions they were supposed to do effortlessly was browse the Internet, and along side provide some basic PC functionalities. Looking back, I think, this promise never worked out, and Apple with its iPad showed just how that experience should be.
Xubuntu comes installed with Firefox. It works great, I never had much complains about Firefox, except its UI feels heavy. So the next browser choice was: Chromium. 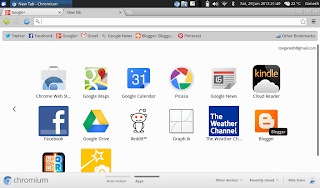 The browser of my choice: Chromium

Chromium worked great till someone send me an Youtube, that I quickly wanted to watch .. no Flash plugin in Ubuntu! And I thought Youtube was all HTML 5. But apparently it is not, at least not yet. The biggest let down is that none of the live streams works without Flash. And so I visited Adobe site to install the latest Flash player. And I am informed that Flash is no longer under active development for Linux! What?! Ok I know Flash is kind of dead, but still.

So, I reluctantly switched to Chrome (the browser that I generally avoid). Here, Youtube "works", but it is choppy video, the incomplete GMA 500 drivers shows up its inability to render video here. But there other problems: after doing some investigation I found that XOrg process seems to consume one HT core (the T91 has Atom Z20, that has two HT cores), for apparently no reason. This is either a problem with XOrg, or as result of GMA 500 driver being not able to support some operation (again due to closed source nature!), which are then emulated by the CPU. But all this actually kills the experience of browsing the net on the netbook. At the end of this I still felt as if IE10 with the unsupported GMA 500 on Windows 8 performed far better (not sure how IE 10 fares on Win 7, with official GMA 500 drivers though).

Ever after the Flash exception, I still didn't want to install any thing that is not opensource. So I though it would be good to convert some of my music files to ogg and use it on my Netbook. I think ogg is a fairly good format to compete with MP3, but compared to MP4 (audio), ogg is far inferior as far as the file sizes go (some times you may get as much as 5-6 times lower file size with mp4-audio as compared to ogg). Due to the state of the GMA 500 driver, I didn't even bother to check how video works.


Office application: Not much

Now a days I hardly use office. Most of my work gets done via Python / R. When I need office, I use my reliable desktop (yes I still use a desktop), which runs on Windows 8.

For me this is terminal, vi, Emacs, browser, compiler, and interpreter .. and all are there on Linux!

One thing: if the GMA 500 drivers were complete, Linux on this machine is just superb (consumes less disk, and offers far more than a vanilla Windows installation). In the end however, I may switch back to Win 7, or try out the new Xubuntu when it is released his October.
Posted by V. Ganesh at 3:41 AM No comments: