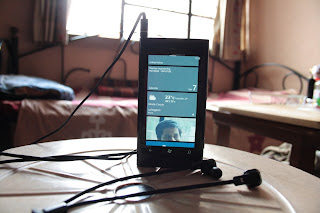 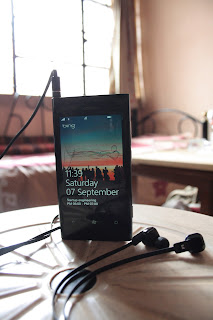 My Nokia Lumia 800. Never going to sell it.
I love Nokia, the brand, the company and the people there that make such great devices. I love Windows Phone for a fresh new perspective on the mobile UI design. But now Nokia being brought by Microsoft is not exactly what I would have wanted, though business wise it makes absolute sense.

Irrespective of what would be my next phone (if any), my current phone (the iconic Nokia Lumia 800) is going to be preserved with me, till I am in this physical world. So much for brand loyalty, I think is okay ;)

It is not calls, text and tweet that would make a smartwatch 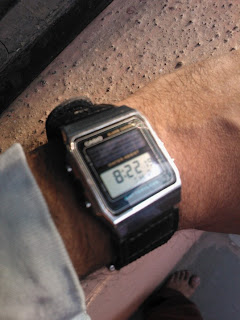 When I was a kid, I loved wearing watches. My initial fancy was with digital watches. Then I liked the analog quartz watches. Once I got my first smartphone (the Nokia 6600), I stopped using a wristwatch altogether. I still rarely wear a Casio battery less solar watch, when going for a long outing. But I almost always never seem to like wearing anything on my wrist.

Most of the times I find the functionality offered by my wristwatch redundant. Well my current Casio does only the following: Show time, Show data, has stop watch, and I can setup an alarm. All of this I can do it on my smartphone in a much more intuitive way. The only incredibly important thing that my watch offers over a smartphone is the virtually lifelong, never ending battery, oh well it doesn't have one, it uses a supercapacitor instead.

So with all the media interest on the "upcoming smartwatches", it made me think: What exactly can a smartwatch do better than a smartphone?

It can not be calls, text and tweets
I don't see at all how a smartwatch would be more useful by merely offering what a phone already does good: calls, text and tweets. Moreover, I don't think that it is really useful or adds value as a device on its own. The reason why smartphone replaces a PC for most of the tasks is that it incredibly easy to text, call or tweet, or for that matter check email on a smartphone than on a PC. A smartphone can do this with a reasonable screen estate and with some very smart on screen keypads for entering text. This may not work out as much on a smartwatch. An alternative would be to use voice commands, but it would look funny yelling into my watch ... mistaken for characters in Captain Vyom or Space Age Sigma TV serials ;)

Sure you can link up a Bluetooth headset, but then you are wanting to keep two things charged using the battery. That doesn't make it smart, and no you can't yet power this on body heat. I would instead just pick that smartphone from my pocket and speak or text in a much more convenient way.

What would be unique applications on the smartwatch?
To me a smartwatch should offer all of the following to be useful:

So what are 3 things from above that are most important?
No, I can't cut down further, I would rather (not) use my current watch instead.

The interface part is tricky.
Most of the so called "mockups" I have seen so far (or the UI available on current 'mobile watches') is just dumbed down, scaled down version of a smartphone UI. That simply is not going to work. Some people may claim that Windows Phone UI (the modern / metro UI), would be great on the smartwatch too. But I don't think that is going to work either. Although a refined form of Windows Phone UI may actually work. Here is my 30 minute powerpoint mockup :) 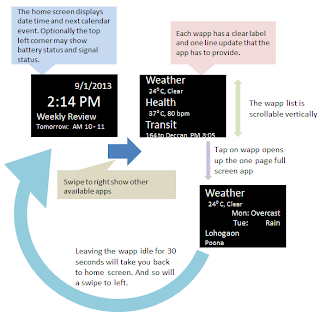 A mockup of smartwatch UI that I would like to see.

﻿
Of course to realize this into hardware and software is a task in itself, probably not possible as a single entity.

In any case, Samsung is going to show its smartwatch next week, let us see what they have. And Apple has been rumored long to be developing one, I hope that they have some of the things I mentioned in the post. But I would be quite thrilled if Microsoft and Nokia come up with some elegant solution as well. I would consider myself rather lucky if I get a chance to work with one of the teams doing this work though :)

(Update Mar, 2014: Samsung has indeed released multiple "smart watches", but none of them are actually up to mark, and doesn't seem to solve any real issues)