Pune is known as a hub for auto manufacturing, with a number of international brands having manufacturing facility here. Even so, India is not exactly known to the world for its manufacturing or innovative consumer centric products. A startup from Pune, Enovitech, aspires to exactly change that. This is a story of their beginning.

I had known Alok Damle, the founder of Enovitech (see http://enovitech.com/ and http://www.enovitechxcite.com/) for more than decade now. We had been classmates at the ISSC in Pune University. So when I met Alok Damle in July 2012, it was no surprise for me that he had already founded his startup with a goal of building an enterprise that brings India into the global map of innovative consumer products and services. For a person with a majors in Computer Science, it has been a long journey. But an interest and intent in engineering has defined his past job experiences, particularly the last stint with Mass Spectrometry Instruments Ltd.

After few exchanges over e-mail, I visited the garage near market yard in Pune (to date, it is operated from the same place) where Alok had setup the initial operations of Enovitech. At that time it was only Alok and another guy, Ramesh, physically at the company. Alok told me that he has a Mentor for Enovitech, Mr Murali Cherat. Although I have not met Mr. Murali, I understand that he has brought in his immense experience to help boot up Enovitech. The team has more members now, all super interested in the vision of Enovitech.
A startup, now a days in the US is largely focused towards a single product or service, this is not necessarily the case. Further, the funding and mentoring environment in the US is a lot matured, while in India, this is just beginning to catch up. So when Enovitech launched, it had no real investors, it mostly boot strapped with founders own savings. This kind of initial funding is routine in India, and I think in many other places too. Even when Enovitech launches its first product, the Ceeld (pronounced see-led; rhyming with sealed), the funding situations has not really improved. It is still mostly funded by Alok and a few others from their personal savings.
The journey to its first product has been anything from smooth. When I first saw the prototype of ceeld in July 2012, and few other products, I had thought that ceeld (or another un-announced product) would be in market by the end of that year. That was not to be the case. Enovitech ran into problems with the contractor to which initial prototype manufacturing was assigned. Despite repeated attempts and promises, the external partner did not meet the promised timelines. In the end, Enovitech had to end the contract, and find another one. Fortunately, for them they did find one. But precious time and money was lost in the process.


Manufacturing is hard in India, especially for a small startup, that do their R&D and design in-house and contract out the work of actual mass manufacturing to external companies. More often than not, the quality is compromised due to lack in technical maturity of the contractor, and in many cases, simply because the other party is not really interested in the small orders a startup will give. This in-turn is more burdened by the fact that there is limited support by Government in India for local startups in the manufacturing sector. Alok has often pointed out to me that it is far cheaper to get the manufacturing done in China and import it by paying appropriate duties.


Another aspect is the final product design. While Enovitech does all of their R&D in-house, with a strong emphasis of patenting their productions and design, they were initially inclined towards taking external help for the final product design. However, after a stint with a well known designer didn't pan out as expected, they have decided to mostly do this on their own. It is still to be seen if this works out good for them. For their first product, ceeld, they have already filed for an Indian patent. The final product, which I could get my hands on works as advertised, but I would love to see more polish here.

"Manufacturing is hard in India, especially for a small startup"

When I showed the package to my Dad, the first thing he said was, "Looking at the front of the package, I have no idea what the product exactly does, its kind of confusing. I have to read the back to actually know this." It is this kind of confusion that Enovitech needs to address with the packaging and the finish as it goes to retail. Sure this is a beginning. And things would be ironed out. Alok tells me that he was pressed with time to design the packaging, so they are not exactly up to mark, but would be ironed out by the time it hits retail stores. Enovitech at this point is in talks with some large retailers in India, and would be soon exploring options overseas. 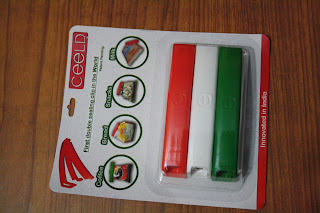 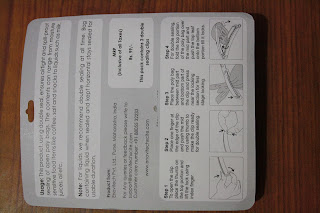 Enovitech also needs to improve on the packaging front. Packaging is informative, and inspiring (those colors of clips directly reflect the colors of Indian flag) to some extent but not in a global perspective. And there is certainly a lot to be done in the way the product is opened up from the package.

This is a beginning. To get out of gate is the first step for a startup. To get people to know what they are doing is the next. And to get people to want what they are building is an affirmation of the vision of the startup. I think Enovitech has all the important ingredients here. From now on they need to keep people interested, there are more eye balls watching them now.

Side Note: Enovitech has put up a stall in Kumar Pacific Plaza (top floor), on Shankar Seth Road, Pune for the launch of ceeld. The stall was opened on 7th Dec, 2013, and will be open for next 3 Saturdays.