A quick and dirty algorithm for Maximum Common Substructure

While there is vast amount of literature dedicated to algorithms for Maximum Common Substructure (MCS) search, particularly with respect to molecular graph (see for instance: http://scholar.google.co.in/scholar?hl=en&q=maximum+common+substructure&btnG=), I wanted to quickly write an algorithm without reading any literature on the subject. And thus this algorithm was written, typically over the weekend.

1. Convert the molecule into a bit representation. This is akin to generating fingerprint of the molecule, but in this case a fingerprint is generated for each Atom in the following way:


2. Match the corresponding bit atom representations (generated above)  among the two molecular graphs, and build a pair list. This matching is done in two stage: the first stage involves exact bit pattern match, where as the second stage involves partial match. When doing the partial match, the atom pair match that has the maximum bit matches is taken. The pair list thus generated becomes the seed for 'growing' the graph that would hopefully be the maximum common substructure.

3. For each of the pair list generated in step 2, start growing the graph using a breadth first traversal method, at each stage checking if the corresponding expansion in the paired molecule is also possible. The pair stops growing, when no such expansion is possible. And the algorithm stops when there is no growth for any of the pairs in the list. The pair with the maximum number of elements then forms the maximum common substructure. Use this pair to next generate the template molecular sub-graph representing MCS.

For finding MCS among a set of molecules:

4. Find the molecule with least number of atoms from the set, and mark it as reference molecule. Follow steps 1 to 3 for the pair of reference molecule and every other molecule in the set. Instead of just picking the pair with maximum elements in step 3, save the complete list (L). Next, pick the pair list that has least number of elements as reference (Lp). For a member in this list (iLp), search the complete list (L), to see if every list has the member iLp, if yes add it to a new list (Lnew). Repeat this procedure for every member of list Lp. Finally, the list with maximum number of elements in Lnew is the MCS for the set of molecules.

That is it. I have tested the algorithm on different sets of congeneric series of molecules, and it pretty much works for all. For non-congeneric set however, one needs to build a cluster algorithm to find the MCS in sub group of molecules, that is work for some other weekend.

How to solve the 'phone' part of the wearable device? 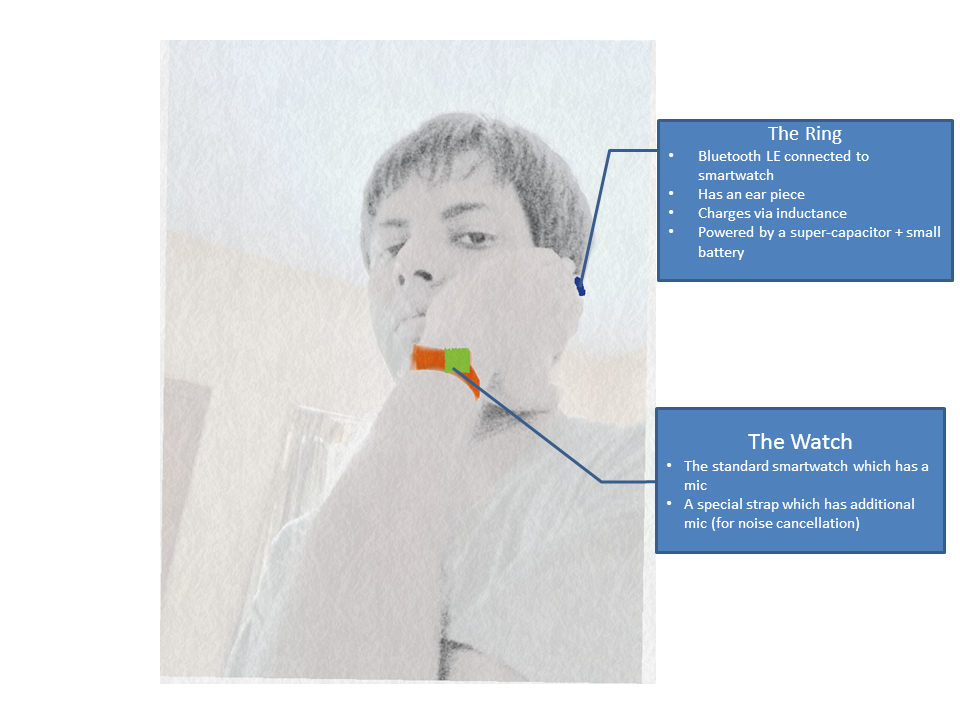 That image above pretty much explains what I have in mind. Most of the wearable we have seen so far are mostly glorified notification system. While I don't really think this is the right way, see my earlier post on smartwatches here: http://tovganesh.blogspot.in/2013/09/it-is-not-calls-text-and-tweet-that.html

The problem with all the existing wearable tech is that you still need to carry around your phone. That essentially means you have to carry more devices when you are taking a wearable with you. What if the wearable device replaces your smartphone as well? With the phones getting bigger and bigger, I would like that to happen. The most difficult part, I think is to get the 'phone' part done correct (there is of-course the batter issue, but that is a different aspect altogether). And I think the perfect way to do this is to build a ring that can act as an earpiece. In fact, for most part the wrist and fingers for most of us perfectly fit in place to be near the mouth and the ears when you place your hand as shown above. I know this looks a little bit crazy. But if this done right, there is actually a revolution waiting to happen. I am particularly interested in the application and UI side of the smartwatch, it is probably the next wave of apps - should we call them wapps?

What do you thing?